ASIA'S LANDS have cultivated strong traditions of hospitality throughout history, from serving tea to greeting namaskar or sawasdee with the courteous bow. But a global courtesy test by Reader's Digest sees a flip side to this.

The magazine administered three politeness tests in the main cities of 35 countries where it is published: dropping papers in a street to check helpfulness, counting how often shopkeepers said “thank you”, and testing how often someone held a door open for others.

The results were released last week, and they are surprising. New York City emerged as the most polite city and Mumbai as the least!

Here are other findings:


Here in Mumbai, citizens have been quick to dispute the results. Over the weekend, newspapers took the city's politeness quotient by interviewing celebrities and common folk. The universal response: you have to live here to understand its graciousness. Scriptwriter Salim Khan offered: “The people who did the survey should have worked harder to know Mumbai better.”

Well, true: Mumbai grows on you, although slowly. And I am glad that my fellow Filipinos were being their usual mannerful selves during the candid tests. But the one question I have about the whole survey regards the methodology designed for it. How appropriate are the parameters designed by Western minds for non-Western cities?

I have to wonder how valuable a survey about global courtesy is when differences in cultural dimensions are not taken into accountMy experiences in Bangkok, Phnom Penh, and Mumbai have shown me that common courtesies are all relative. A Thai would show gratitude with the bowing, palms-closed gesture called wai. In India, most languages have no specific word for “please”, so politeness is used in the way that the request is worded. Also, the act of giving is considered to be such a reward that it becomes bizarre to thank the giver! The Indian, however, may express gratitude with a phrase like “May you live a hundred years”. And in the conservative Buddhist, Muslim, and Catholic societies of Southeast Asia, a well-bred lady is not expected to pick up a newspaper dropped by a man!

So I have to wonder how valuable a survey about global courtesy is when differences in cultural dimensions are not taken into account. Perhaps the good news is this: the Reader’s Digest survey reminds us of the reality of human diversity and shows us more reasons to celebrate it.

For all its worth, here is the final tally: 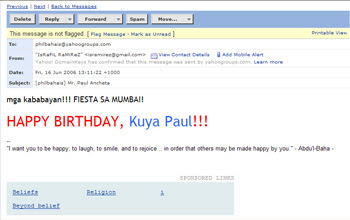 How not to hide from birthdays.
Image source: Isra Ramirez's e-mail to the world of humanity

THE FIRST messages on my mobile phone last Friday came from my ten siblings around the world. This is how the family remains connected, wherever we are. We commemorate the events of our lives with timely messages across the seas in phone calls, text messages, or e-mails to one another. AND SO the world's most euphoric sports event has kicked off, and millions around the world are once again unified with the common language of cheering wildly. Here in Mumbai, retailers are latching on the 2006 FIFA World Cup fever with colorful branding and themed merchandise. At HyperCity, the cheering takes on the form of a splendid display created by visual merchandiser Darshita Thaker: six life-sized cutouts of football players stand at the store entrance dressed in actual gear.

I told Anand Ray, a colleague at HyperCity, that I was rooting for the underdog Croatia. I have no national team to cheer on. Like India, the Philippines is not playing in the World Cup; however, unlike Indians, Filipinos do not turn ecstatic over the game.

Football is simply not popular in the Philippines, despite the national football team being the oldest in Asia. The national sport is basketball: give the Filipinos one match, and you get the most boisterous moments of your life. Football is played mostly in high schools and universities as part of physical education courses. The game is also popular in the central islands of the Philippines, where Spanish influence remains strong.

Give the Filipinos one basketball match,
and you get
the most boisterous
moments
of your lifeSo what can I do when the whole world is gaga and I have no national team to go gaga over? For one, I can vouch for hometown Germany; my sister lives there, and everyone else is cheering for them. Or I can vouch for Spain, old motherland of the Philippines; they deserve to be in winning form like the rest of the Latin world. Or I can just wear the flag of Croatia. Wait, are they actually playing?

Oh well, I guess I can always simply cheer on Darshita's life-sized cutouts in front of HyperCity. I think one of them looks like a Filipino version of Ronaldinho . . . JASON DE VILLA WRITES, in A Hundred Words A Day, about the mandatory signage shown above in one of Manila’s Mass Railway Transit (MRT) stations:

What were the operators of the MRT thinking? Lumping women, who have fought for decades against the image of being the “weaker sex,” with the elderly, children, and the disabled!

As a willing crusader for female rights—read my essay on female fortitude—I am with Jason on this. What appalls me are the very low taste levels and offensive judgment evident in making the signage. The physically challenged, both elderly and handicapped, correctly require such special treatment in a massive public facility like the MRT. However, by including the whole female gender in the category of preferential treatment, the message thus reads: “Women are physically challenged; they cannot be in the same place as men.”

Our generation has seen the most promising advances in ensuring the equality of men and women in the past 163 years. Perhaps we need a train station signage such as this to remind us that trains of thought are still arriving from a different direction . . . and that so much is yet to be done to redirect railways towards building a global society.

MY ONE lingering wish for humanity: that it never suffers from migraine. I finally recovered from a two-day attack, and, as always, the suffering is insufferable. Rhea Aquino, a former colleague in Israel, had a name for it: Miggi. When I would call in sick, she would ask, “Kuya Paul, is Miggi on home visit again?” My last attack was seven weeks ago; perhaps Miggi thought it was time pay a “home visit”.

I have had migraine episodes since my late twenties, and I have never really managed it perfectly. Once the symptoms show up, paracetamol and ibuprofen come in handy, but oftentimes the effects kick in too late. I used to swig a steaming mug of black coffee in hopes that the caffeine would stimulate those spasmodic blood vessels that turned my head into a throbbing boom box; I stopped the coffee-swigging habit in fear of becoming coffee-addictive. My sister Myriam used to massage the tips of my fingers to stimulate blood vessels (and they are often relieving), but to become a self-masseur is the last thing on your mind when you are under attack and you live alone.

The only solution then is to crawl into a dark, quiet room and sleep it off. This was challenging for me in the past two days, as apartment walls in Mumbai are never really sound-proof (read: Mumbai is noisy, period). Perhaps I should return to the steaming mug of black coffee next time. That, or sing along to my head-turned-boom box. The day after: all wet and wild on the street where I live.
Photo: Paul Ancheta

THE FIRST RAINS of the year arrived heavily in Mumbai last Wednesday, and they threw Mumbai out of gear. Monsoon season normally starts early June, so the heavy downpour took most Mumbaikars—including the regional weather bureau, which forecast “cloudy skies” that day—by big surprise.

Hopefully it will not be a city on water standstill, as I saw last Wednesday evening. We were driving back to HyperCity from a suburban agency inspection when the Really Big Rains began. The sidewalks quickly disappeared under cascading water, and the three-lane street became one-lane. By the time I got to HyperCity two hours later, the torrent had stopped, but the showers continued. I learned later that those two hours of downpour were enough to cause the water logging and to grind Mumbai to a halt.

It is time I get three big umbrellas. And a pair of Wellingtons.