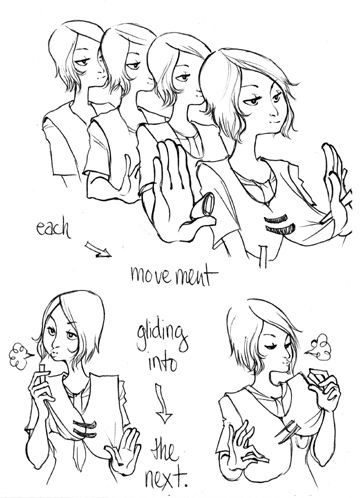 ASIAN-AMERICAN COMIC-BOOK Artist Jen Wang (b.1984) has injected Asian grace and humor into the most mundane of travel activities. See the brilliant mind of this artist on the well-written (and drawn) Dance of the Flight Attendant.

THREE OF the world's 10 largest malls are in the Philippines, according to Forbes Magazine this month. The trio belongs to SM Group, one of the oldest organized retailers in the country. Quite a distinction for a land driven by a strong spirit of communal activity. (We Filipinos call it the bayanihan.)

Add the fact that the Philippines has the most number of text messages sent daily. Imagine text messages being sent from those gigantic malls with all their state-of-the-art facilities (including chapels, health clinics, and an Olympic-sized swimming pool in SM Mall of Asia).

These trends make me wonder (and I fear any affirmative answer): have urban Filipinos stopped making personal conversations with each other? And have they turned the shopping mall into the modern village they live in?

Related Site: List of the 10 largest malls in the world

I DID IT. I ran today's Mumbai Marathon. Well, I did not actually run the entire 21 kilometers comprising the half marathon, but the twelve kilometers that I managed in two hours and fifteen minutes is the longest distance that I have ever run since junior high school. And this is a personal benchmark that I will never forget or ignore.

Organized by Standard Chartered Bank, the Mumbai Marathon was meant to provide Indians (and non-Indians) with an opportunity to run for a cause. Now in its fourth year, the event has shown statistical growth (close to 30,000 athletes and amateurs versus 25,000 last year) that strengthens its claim as Asia's largest marathon. It has attracted a number of NGOs supporting a variety of causes, from awareness for the disabled to nature conservation.

My employer pledged to run for the cause of child rights. Fifteen of us, including the managing director, showed up this morning, and we started the race along the rim of the Arabian Sea. I vowed to savor the whole event as it might be my last race in India (or my last one ever, period). Initially, we planned to walk the miles, but as the race progressed, I decided to join the fervid running crowds and meet my colleagues elsewhere after the race.

When I made my way up a bridge, an elderly couple carried a small piece of paper scribbled with “You can do it”.And run I did, albeit slowly. I did not physically prepare for the marathon, so I took turns walking and running—and savoring Mumbai’s morning streetscapes. The views from the boulevards were stunning! Façades I had only seen in a passing car were now in clear focus under the shimmering light of the rising sun. There’s the Victoria Terminus! And here, the Hilton Towers! Over there is the seaboard, and beyond the sea, the Malabar Hill skyline! And did I tell you about the Art Déco buildings of Marine Drive and the Parsi houses of Peddar Road?

But more impressive was the show of public spirit. Volunteers cheered us on from the sidewalk with placards, bottled water, candies, and music. Children and their parents waved from balconies. Around me were screams of delight whenever friends met each other along the way. When I made my way up a bridge, an elderly couple carried a small piece of paper scribbled with “You can do it”. I paused and thanked them. “I think I can do it,” I smiled back.

On two separate occasions, strangers asked where I came from. “Shopper’s Stop”, I replied without missing a beat. Of course I knew they were referring to my nationality, as there were lots of non-Indians running. But I wanted to make a plug for my company’s participation. There were groups of people running, or walking, together in bright shirts blazoning their organizations. Several teams even carried huge banners. I passed by a man loudly asking on his mobile phone where the rest of his colleagues were.

As we approached the eight-kilometer mark, the professional long-distance athletes began to emerge on the other lane. Spectators and runners began cheering wildly. By now my steps were getting wobbly, my right sole feeling raw. But the sight of those athletes who run through pain made me push harder. I knew I must not give up, and I was going to make it through another two kilometers.

When my colleagues made their way past Hajji Ali Juice Centre, we all knew we must stop: it was the halfway mark of the marathon. I was ahead of them, so I detoured and sped up to meet them. Congratulating each other, we paused for photos and cool fruit drinks. We did it.

And I did it. I ran a marathon.

“DON'T WORRY, you're not the only one who won't be voting in May,” reassured the voice on the other end of the telephone line this morning. She was referring to this year’s legislative elections in the Philippines, and I was telling her my regrets at being unable to meet the voting registration deadline for overseas Filipinos. I was masking my irritation at not having received any embassy advisory on the registration schedules—and at the fact that my twenty-year record of participating in Philippine general elections would be broken this time—by trying to sound calm and diplomatic. The other voice on the phone, after all, belonged to a diplomatic agent. She was Mrs. Laura del Rosario, Philippine Ambassador to India.

She called me up. More accurately, she responded to my phone call earlier today to the embassy’s duty officer, in which I made my disappointments very clear. “Like you, I will miss the polls,” she explained, “because I will move to Hanoi in March and it will be too late to register myself in that place.” This was enough to placate me. Simply put, if the official representative of my country’s government misses the vote, then why am I fretting?

“There are 439 Filipinos registered in the embassy. 439! Isn't that interesting?”Her voice was warm, maternal, and engaging. It was almost like talking to a former high school teacher. She spoke about recent events that the embassy hosted, and gave me names of Filipinos I could—and must—connect with in Mumbai and Hyderabad. “There are 439 Filipinos registered in the embassy, and most of them are wives of Indians. 439! Isn’t that interesting?” It is interesting and remarkable, considering that there are over 10 million overseas Filipinos worldwide (making us the third most internationally mobile nationality after the Chinese and the Indians). India seems to vanish from the map every time a Filipino decides to leave the Philippines and chooses a country of destination.

I promised Ambassador del Rosario that I would try to meet the embassy staff the next time I visited Delhi. The ambassador may no longer be in India by then, but the refreshing conversation with her this morning leaves me with a pleasant memory of her goodwill and the confidence that the Philippines is being represented very well in the diplomatic circle.

From mills to malls

RIDING PAST the sprawling Phoenix Mills complex in south Mumbai, my driver Santosh announced that his father worked at a cotton mill for thirty years. “He was boss [supervisor] in that big mill,” he said, “until the strike happened.” Santosh was referring to a milestone that began exactly 25 years ago, when a quarter million workers at over 50 textile mills in the city went on strike to demand a better future. It ended in failure eighteen months later. The city’s 128 year-old mill industry began to close shop; the workers lost their jobs and, for most of them, the future that the strike was all about. Santosh’s father was one of them.

I asked Santosh to stop the car at the foot of the flyover bridge outside Phoenix Mills, and stared at the round chimney towering within the complex. It was part of the original Phoenix Mills—in fact, it may be the only thing left of a facility that helped make Bombay's textile milling one of Asia's busiest manufacturing industries during the twentieth century. Those were the days when citizens in Bombay seemed to have a fair share of the right to earn and sustain a living.

Today, the chimney stood decrepit yet proud of a romantic heritage of industrial might. Circling it are swanky retail spaces and banners of international brands. Farther down the road, high-rise commercial towers are rising up on hundreds of acres of land that once housed other mills. Real estate experts estimate that this land is worth an estimated USD 2 billion at today's prices. The high rise has replaced the chimney as a postcard image of a modernized city.

The transition from chimney to high rise is sharp and almost harsh. I can imagine how painful it must have been for the mill’s workforce to see the abrupt transition, as they now had to contend with a service sector that was rapidly growing and required a completely different skill set. But sudden and dramatic change is constant. We cannot keep ourselves away from it. We move on with it and adapt to contemporary realities as part of our continuing evolution as human beings.

The experience at Phoenix Mills has made me appreciate once more what Bahá’u’lláh, the Prophet Founder of the Bahá'í Faith, refers to when He declares that, just as lesser living things have times of sudden emergence into new and fuller life, so for mankind also a “critical stage,” a time of “rebirth,” is at hand.

Related Site: Phoenix Mills—Because the Story Must Be Told