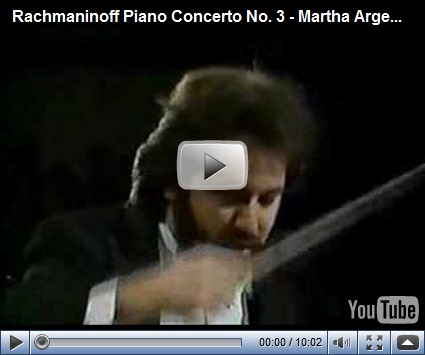 "CONSIDER HOW much marvelous notes . . . influence the spirits! A wonderful song giveth wings to the spirit and filleth the heart with exaltation . . ."

These words from the Bahá'í Sacred Writings describe Martha Argerich's 1982 performance of Rachmaninov's monumental Third Piano Concerto, now immortalized on YouTube. On the first movement captured on the video above, Ms. Argerich brings marvelously disparate notes together in ferocious harmony.  At first, she exchanges quiet melodies with conductor Riccardo Chailly, a man of emotion himself (watch his expressions during the first theme, from 02:43 onwards). Then, from out of the blue, she leaps and soars into what seem to be endless climactic stanzas, throwing fire and thunder all around her. It’s unfortunate that the video does not reveal much of Ms. Argerich’s hands as she chops the ivory keys through this rampage.

And then, just as suddenly, she dives back to a gentle shimmer, closing the movement. Gosh. What an act.

It would have been exhilarating to sit through this performance, live. I've always believed that orchestra players and session musicians are amongst the luckiest people in the world: they experience the joys, colors, and energies of musical passion from the artistes themselves, first-row, first-hand. Thankfully, we have YouTube. You'll have to watch the two other movements of the Third Piano Concerto on the site to fully appreciate the exaltation in Ms. Argerich's performance. If you prefer a more reverential but equally breathtaking rendition, watch Vladimir Horowitz's reading, also on YouTube.