The hills are alive in San Francisco

THE MOST delightful surprise about San Francisco is how such a compact city (49 square miles) of hills and waterfronts can accommodate endless diversities in seamless manner.  For example, on the last day of my weeklong stay, I dined in a quaint neighborhood called Little Italy, at the open-air Pinocchio on Columbus Avenue.  Later, as I walked past cafés and gift shops with lovely little windows, I turned abruptly right on the corner and realized that I had just entered Chinatown.

It seems to me that everything that San Francisco offers is a glimpse of what the future world order could look like: a unified community of remarkable diversity. The ethnicities were unmistakable on my first day.  A Southeast Asian immigration officer screened me upon arrival at the San Francisco International Airport. The cab driver that took me to the Pickwick Hotel was Chinese.  At the hotel, the entire front desk and maintenance teams were Filipinos.  I had lunch at an all-American diner served by a charming attendant from El Salvador.  Dinner that evening was at the Japanese restaurant next door with a Korean crew.

I learned later that the ratio of residents to tourists is 1:2. If you think that’s astounding, get this: there are as much foreign tourists as there are American visitors.  This makes every segment an equal third of San Francisco’s population at any given time.  That’s something every trade and tourism ministry around the world aspires to attract! 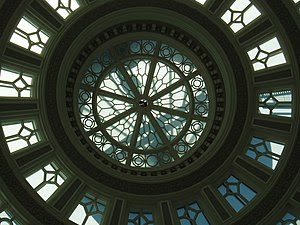 Then there are the artists.  On my last day, I spoke to the architects and designers who rehabilitated the historic Ferry Building Marketplace and the Westfield San Francisco Centre landmarks.  Both renovations reflect the city’s desire and achievement in blending its diverse culture, history, and ethnicities.  As I stared at the newly restored, 101-foot-diameter glass dome above the Westfield and walked past organic and locally grown produce inside the Ferry Building, I understood why these two spectacular projects are landmarks in the city and career milestones for the architects.

I also managed to run to the awesome San Francisco Museum of Modern Art (SFMOMA) before it closed for the day.  Jackson Pollock!  Frida Kahlo!  Ansel Adams!  There are over 7,000 works from legendary sculptors, painters, photographers, and designers who have shaped my generation’s understanding of art. To view their works is to grasp the rebelliousness and inventiveness of our present age.

In Union Square, young musicians played their strings while muscle-shirted hunks danced to portable loudspeakers a few blocks away.  One day, there was even a classical pianist with his piano on the pavement in front of the H&M clothing store.  These sights remind me of Barcelona’s Las Ramblas.  Could it be the Hispanic link that allows public art to be so free and compelling?

On the downside, it was unnerving to see the unemployed begging for lunch fares, and the homeless sleeping in the city streets at night.   Even more unsettling is how decently they are dressed.  I had seen some of them in branded sneakers or leather shoes, and donned in blazers and windbreakers.  San Francisco remains the only city in eastern United States that funds the homeless.  While shopping at the Levi’s flagship store one day, my sisters and I spoke to a salesman who admitted being embarrassed by such support, as it institutionalizes their existence.

For all the dodgy sights—not to mention expense tabs, as I realized that San Francisco is costly—there’s righteousness in claiming responsibility over the marginalized members of society.  There’s no pretense in having struggling street artists and a well-funded art institution coexist within each other’s shadows. There’s tolerance with the famous/infamous San Francisco gay community, possibly the largest in the world.  There’s correctness in keeping those hills and waterfronts clean and unspoiled.  And there’s vision in allowing those Little Italys and Little Indias to coexist with the Chinatowns and Japantowns of the world.

These are values that make the greatest of cities. And these are thrills that must have wowed other visitors like me who left their hearts in San Francisco.